Should you replace that beaten up old back boiler and get with the times? 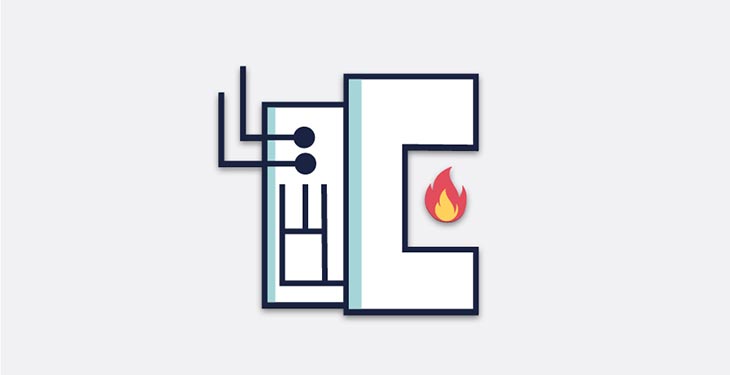 Whats in this article?

What Is A Back Boiler?

Back boilers are quite an old type of boiler that fits behind an open fireplace, rather than having its own cupboard or closed-off area.

Most of them were replaced in 2005 when the regulations around them changed, but there are still hundreds (if not thousands) in the UK that haven’t been dealt with yet.

They may have been cheaper than normal boilers a few decades ago, but they are far more expensive to maintain nowadays.

The main difference between a back boiler and modern boilers is the way they work. They are 70% less efficient and generate a lot of useless heat, sometimes relying on warmth from the fireplace to warm the water inside.

Back boilers also really hard to repair since they are not being made any more and fresh parts are nearly impossible to find.

It is rare to find a back boiler that isn't placed behind a fireplace, which can make it hard to change where they are installed.

This might also mean that back boilers take up a lot of space if you are not using the fire, which means that you can often save space by removing the entire fireplace along with the back boiler. This will cost slightly more, though.

Why Houses Have Back Boilers

Back boilers are essentially a cheaper and smaller boiler, at least by the standards of when they were created. They were easy to buy and could be hidden behind your fireplace, which kept them out of the way and made them suitable for smaller homes.

As mentioned earlier, they were extremely inefficient but could last much longer before breaking thanks to their very simple design.

Unfortunately, since back boilers are almost impossible to repair easily, you will have to replace or upgrade your existing boiler eventually.

Even if it is still working, for now, the price and rarity of some key parts mean that it is probably just as expensive, to repair, as buying a new one, and there is no way to solve the efficiency problem without getting rid of the back boiler entirely.

If your house is new, it likely doesn't have a back boiler, since their popularity dropped dramatically in the early 2000s.

Very few companies in the UK make them anymore, and it is very difficult to find brand new back boilers anymore. Buying a new one is barely worth it anyway, due to the massive efficiency problems they can have.

Should You Replace A Back Boiler With A Gas Boiler?

Back boilers only really have one long-term upside: the small size. The lower price doesn’t matter anymore, since they’re more expensive to run and will have probably cost you more than a regular design would, and the long operational life doesn’t mean much considering it is really difficult to repair them.

The fact that they’re kept out of the way also means that they can be hard to access without taking down parts of your fireplace, which can be annoying if something breaks or you want to make some small adjustments.

The size of a back boiler doesn't matter as much, either. Modern boilers are smaller than those from the last two or three decades, so it's not hard to find a regular boiler that is the same size as (or even smaller than) your old back boiler.

This will only affect people who have a very limited amount of space in their home, but even if that's the case, you can find compact designs that will still offer higher efficient.

The higher efficiency makes a modern boiler far cheaper than a back boiler in the long run since you are using less power to get the same results.

This can also help you get more consistent heat and provide better temperatures in general. Fixing a boiler isn’t “cheap” in the usual sense, but it’s still much less expensive than trying to repair a back boiler, and the money you save on your utility bills will make up for this.

Regardless of what your old back boiler model was, most people will choose a new combi boiler as a replacement since they are some of the most efficient and reliable models available to the general public.

These are also the most likely to work with your existing central heating system, so you generally won't need to swap out anything except the boiler itself.

Different boiler designs will have their own price differences, especially if you end up having to change more than just the boiler you are using.

Getting a professional to remove your back boiler, then buying a new combi boiler and getting it installed, will cost around £600-800 on average.

This price includes things like pipe capping, the installation of new pipes and upgrades to parts of your central heating. If your boiler is going to be in a different part of the house, you’ll have to pay for the pipe involved, as well as the existing pipe that needs to be blocked up to stop leaks.

Some people prefer to go the "system upgrade" route, where they replace the boiler but keep the rest of the heating setup the same.

This can be a cheaper option since it involves a minimal amount of pipework, but it won't always be an option depending on the size and type of your new boiler.

On the other hand, some people want to redo the entire system to ensure that it is all completely fresh, which reduces the chance of older parts breaking down or wearing out.

Costs aren’t always set in stone, so you never know when your price might increase or decrease based on different options and situations.

Some houses might make setting up a new boiler far more expensive due to the thickness of their walls or the way the central heating system is set up. If you’re looking into back boiler replacement, make sure you get a quote or estimate first.

Replacing a Back Boiler with a Combi Boiler

The process of replacing your boiler isn’t too difficult, even if you have to do it yourself. As long as you understand the specifics of back boiler replacement, it doesn’t take long to swap them out.

First of all, all boilers need a flue or some way to ventilate gases, ideally one that won’t reduce its efficiency too much. Back boilers will vent these gases directly up the chimney, whereas a combi boiler can vent in both horizontal and vertical directions.

This often means that you’ll need to set things up differently, but it’s sometimes possible to keep a similar flue and have it vent out of the chimney in the same way.

A lot of combi boilers are able to fit inside small spaces, like cupboards, so it is often possible to fit them in the same space as your older back boiler. They might also work in a kitchen cupboard, under-the-stairs area or behind an interior wall.

If you want to move your boiler to a new area, you'll need to pay slightly more for the extra work, especially if there are no pipes there already.

This can cost anywhere from £300 to as high as £600 on average, or more if you have a larger house that needs more piping. You'll still usually be able to tie it into the existing central heating system, which can save some money on the installation.

Should You Keep Your Old Back Boiler?

There aren't many reasons to keep your back boiler unless you need to save up more money for the installation of a new boiler.

As soon as you have the time and money to replace it, you should try and get it done since the higher efficiency will save more money. However, the fact that back boilers are long-lasting means that you don't necessarily have to swap them out straight away if you don't need to.

They'll break less often than a combi boiler, which can save some money if you're really lucky.

If your back boiler breaks to the point where you need to perform major repairs, you may as well get it replaced. It’ll probably cost around the same amount in the long-term, and it gives you a good opportunity to install a new boiler now that you’re got a solid excuse.

Some back boiler models are cheaper to repair than others, depending on who made them and the parts they use, so it’s not always a terrible idea to keep yours around for a while longer. However, it’s still far more expensive overall, especially due to the massive drop in efficiency that'll increase your bill prices by quite a large amount.

Always choose a new boiler that you know you can rely on. Not all modern boilers are perfect, so if you’re upgrading, you’ll want to make sure you’ve gotten one that’ll work well. A higher-quality boiler might cost slightly more, but you’ll save plenty of money, which makes it a great trade-off.

Decommissioning your Back Boiler vs Removing it

When you replace your old back boiler, you need to work out what to do with the old boiler as well as setting up a new replacement combi boiler.

There are two main options: you can have your old boiler removed, clearing out the space and having it taken away, or you can simply have it decommissioned instead.

This means that it will be switched off and made safe, and then left in place exactly where it is with no need to hire anyone to take it away.

So, what exactly is in this decision? Well, the first thing to bear in mind is cost. Having your back boiler decommissioned and left in place could save you up to £1000 from your full boiler replacement bill, which is potentially worthwhile!

If you are planning on paying for your new boiler on finance rather than upfront, though, then this sort of saving might not have much of an impact on the size of your monthly repayments. If you are paying upfront, however, £1000 off your bill is worth considering!

It is worth noting that even if you opt for decommissioning your back boiler, engineers will still need to get behind your fireplace in order to access the boiler properly.

That means you will probably still need to do some repair work afterwards, including things like replacing some of the surrounding flooring and potentially making repairs to your fire mantle, or even replacing it completely.

Not every boiler can be safely decommissioned. Before you start trying to make the decision of whether to decommission or remove your back boiler, you should call a gas safe engineer in to inspect it first.

Sure, you could just install a new boiler without getting rid of your old back boiler, but there are safety risks with that option that can create major problems.

If you have an old, unused back boiler in your house, and it has not been properly decommissioned, it can present a major safety hazard that should not be overlooked.

An unused back boiler is still full of water, which can stagnate and create health hazards, or can cause major issues with your heating system.